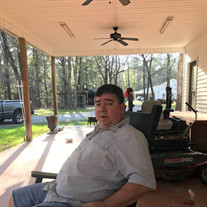 Aaron J. Ard, Ph. D., died Tuesday, June 30, 2020. He was 56. Funeral services will be held Friday, July 3, 2020 at 2 PM at Kistler-Hardee Funeral Home Chapel. The family will receive friends one hour prior to the funeral. Aaron was born in Darlington County, the son of Tommy Ard and the late Carol Ghoens Ard. He grew up in Darlington on the West End, dropped out of school in the eleventh grade, and joined the United States Navy, where he excelled through the ranks, becoming a member of the select and prestigious United States Navy Special Boat Unit. Returning to Darlington, he began a career in law enforcement under Sheriff Glenn Campbell. In his off time, he took karate, earning the Black Belt. Aaron next decided to try his hand at being a game warden. This is when his life changed, as he was turned down because he did not have a high school diploma. He immediately enrolled in Adult Education, earned his GED, and began accepting his brilliance as an attribute. He enrolled at a local technical school, where he earned the Associate Degree. When he proceeded to earn his undergraduate degree, a professor invited him to pursue his education further. He accepted. Having completed his Ph. D. in Statistics at Cornell University, Dr. Ard became a member of the faculty of Coastal Carolina. He taught in the Wall College of Business at Coastal, and was named Professor of the Year three consecutive times. He later would move to The University of South Carolina, where he taught for the rest of his too-short life. Aaron never lost sight of where he came from. He loved Darlington, especially the “Mill Hill.” He even took a leave of absence from the University to teach a year in the high school he once dropped out of. He did this for the “kids like him” as he called them, but he also did it for himself. He every took opportunity to let folks know, “You can be anything you want to be if you work hard at it.” Once your friend, Aaron was always your friend. He was a hard worker, frugal, smart, and he had opinions worth listening to. “Big A” was not into appearances, he did not put on airs, and he said what was on his mind. You had to love him! Aaron enjoyed good health until very recently, when he experienced a kidney issue. During a routine doctor’s visit yesterday, Aaron died. “I don’t fear death,” he said. “If cancer is my pathway to the next life, then so be it.” Surviving Aaron are his Dad Tommy and his sister Argent Weatherford, with her husband Brian. He also loved his nieces Hannah, Chelsea, Kaleena (and her husband Glenn), and Rachael, and his three great nephews and two great nieces. Kathleen Saunders was his longtime friend. If you would like to send a memorial, the family suggests you pick a scholarship at a school of your choice and advance someone’s education.

Aaron J. Ard, Ph. D., died Tuesday, June 30, 2020. He was 56. Funeral services will be held Friday, July 3, 2020 at 2 PM at Kistler-Hardee Funeral Home Chapel. The family will receive friends one hour prior to the funeral. Aaron was born in... View Obituary & Service Information

The family of Aaron J. Ard PhD created this Life Tributes page to make it easy to share your memories.

Send flowers to the Ard family.