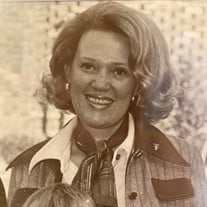 Archie Ann Hatchell Morgan, 86, of Society Hill, South Carolina, went to be with the Lord on Sunday, June 5th, 2022. Funeral services will be held Wednesday, June 8th, 2022, at 11:00am at Gold Hill Cemetery, Gold Hill, North Carolina. Due to illness in the family, Ann's memorial has been RESCHEDULED; Ann's Celebration of Life will be held at the Society Hill Library, 114 Carrigan Street, Society Hill on Wednesday, July 6, from 4 to 6 pm. Ann was born in Cuthbert, Georgia on January 7th, 1936. She was the daughter of Roy Fredrick Hatchell and Ruth Small Hatchell. She spent her young life in Cuthbert, Georgia and moved to Salisbury, North Carolina in her senior year of high school, graduating from Boyden High School, Salisbury in 1954. At the Federal level, Ann served as Director of Public Affairs, US Department of Energy, during the Reagan administration; and as Executive Director National Advisory Committee on Outdoor Advertising and Motorist Information, Federal Highway Administration, US Department of Transportation. In SC state government, Ann was Director of the Highway Safety Program, Office of the Governor James B. Edwards, State of South Carolina. Ann also served as Program Director, Area Agency on Aging, for the six-county Pee Dee section of South Carolina, and as Director of the Regional Governor's Office for Citizen Service. Ann held several management positions in the private sector, most notable was as a property manager for McDevitt Street Company, Charlotte, North Carolina. Ann began her political involvement with the Young Republicans, Palm Beach County, Florida during the Goldwater campaign. Later, in South Carolina, she managed Republican Headquarters for the Sixth Congressional District and the County Election Return Headquarters. She served as a State Executive Committee Woman and in the 1970s was a trailblazing female candidate for the South Carolina State Senate. In the past, Ann was active in community activities, serving on the boards of Farmers Home Administration, League of Women Voters and the Florence County Humane Society. Ann loved Society Hill and the State of South Carolina and was designated as A Palmetto Lady through the State of South Carolina's The Order of the Palmetto. She loved biographies and history, was member of the the General Society of Mayflower Descendants, also known as The Mayflower Society. Ann had a great love of birds, flowers and books, and, during retirement, served as a Librarian at the Society Hill Library, Darlington County Library System. She considered all of her friends in Society Hill to be family and loved them fiercely. Surviving are her daughter, Holli Hatchell Fowler, grandson, Joshua Burke Fowler (Bailee) along with great-grandsons, Ezekiel and Ezra Fowler, and grandson, David Chastain (Jennifer) along with great-grandchildren Ava and Henery David Chastain; daughter, Merry Morgan Smith (Robert), and grandson, St. John Alexander Smith (Krystal) along with great-granddaughter, Lorelei Smith, and granddaughter, Archanna Evans Smith; son, John Elmore "Trey" Morgan, III (Kristen) along with grandson, John Elmore Morgan, IV. Family and Friends are invited to sign the guestbook at www.kistlerhardeefuneralhome.com.

The family of Archie Ann Morgan created this Life Tributes page to make it easy to share your memories.

Send flowers to the Morgan family.