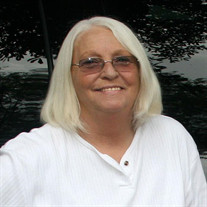 Betty Sue Driggers, loving wife of Michael Driggers for almost 46 years, passed peacefully at 12:05 AM on Sunday, September 18, 2016 in her home. Betty was born to Jack and Maude Driggers on March 11, 1952 in Cheraw, SC in the home of her grandparents, C.C. and Mamie Hewett, who resided on Oak Street in Cheraw which was commonly referred to as the Cotton Mill Hill. Betty’s father Jack passed away in 1959 when she was just seven years old in a tragic automobile accident. Her mother remarried a couple of years later to Albert Weaver, Betty’s step-father, who helped raise her as his own daughter. Betty and Michael built their home right next door to her parents’ home on Oak Street in 1980 and she remained there until her death. Betty and Michael have one son Dale and two grandsons, Bryson Driggers and Bryck Driggers. Betty had one brother, Jackie, husband to Linda Driggers and the parents of Joshua (Ashley) and Matthew Driggers (Betina), Betty’s two nephews. Betty was also a great aunt to Kailey and Jacob Driggers, children of Joshua and Ashley. Betty was a pet lover and her dog Kinsey has been with the family for 13 years. She was also an avid Gamecock fan who was most proud of the baseball team’s championship years. Betty and Michael loved camping in their recreational vehicle and camped up and down the Southeast Coast but were particularly fond of the Cheraw State Park. Betty was predeceased by her father, Jack in 1959 and her mother, Maude in 2013. Betty also leaves behind a special friend, Chris Horton, and numerous family members and friends who have been most helpful keeping her comfortable during her final days with us as well as providing support for the family during this time. Funeral services will be held on Tuesday, September 20, 2016 at 3 PM in the Chapel of Kistler-Hardee Funeral Home in Darlington. Entombment will follow in Chatham Hill Memorial Gardens in Cheraw. The family will receive friends from 6 until 8 PM on Monday, September 19, 2016 at Kistler-Hardee Funeral Home in Darlington and other times at the home in Cheraw. In lieu of flowers the family asked that donations might be made to either the Hospice of Chesterfield County of the Humane Society of Chesterfield County. Sign the online guest book at www.kistlerhardeefuneralhome.com

Betty Sue Driggers, loving wife of Michael Driggers for almost 46 years, passed peacefully at 12:05 AM on Sunday, September 18, 2016 in her home. Betty was born to Jack and Maude Driggers on March 11, 1952 in Cheraw, SC in the home of her... View Obituary & Service Information

The family of Betty Sue Driggers created this Life Tributes page to make it easy to share your memories.

Send flowers to the Driggers family.