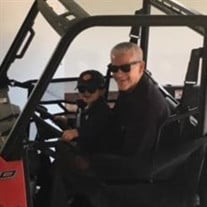 James Austin Freeman II, we called him “Buddy”, died Friday, May 29, 2020. A private graveside funeral will be held in the coming days at the LDS Cemetery in Society Hill. Todd Hardee will bring his eulogy, Chuck Black and Jimmie Hardee will sing. His family will be at Kistler-Hardee Funeral Home Sunday afternoon from 2 until 5, and invite friends to stop by for a visit. Buddy was born in Darlington County. He was the son of the late Ray A. and Patricia Freeman. He was a 1982 graduate of St. John's High School. After high school, he worked for his family’s logging company, Freeman Logging, for many years, eventually becoming the owner. As time passed, Buddy decided the profession of his father was no longer his forte, so he sold the logging company and went back to school. He soon graduated from Florence-Darlington Technical College with a degree in Nursing, and would follow the professional path of his mother for the rest of his life. Buddy was good with his hands and could fix practically anything. He said it was a trait he picked up working with junk in the logging business! His skills were many, and he chose not to pay others to do things he could do himself. He was tight! He loved to fish, and in his younger days he fished often. This slowed down as he got older, but the desire was still there. Buddy was funny as hell! He had a sense of humor that kept his friends entertained, and made his patients feel at ease when surgery was just ahead. He was quiet, reserved, he was a thinker, he loved photography, and was good at it. He loved the beach, especially the Georgia beaches. He said they made him feel a sense of calmness he never felt anywhere else. Buddy cultivated old friendships. Once his friend, always his friend. There are a few of us that will walk away with a hole in our hearts that will leak until we too, enter the church triumphant. A hole filled with memories of Buddy Freeman that will shake occasionally with uncontrolled laughter, a leak a time or two with the tears of sadness. He was one of the good ones! His pride and joy were his children, Mallory, and husband Travis, Austin and wife Kirstie, and the apple of his eye, Fulton, his one and only grandson, who hung the moon. He is also survived by his brother, Teddy and wife Jennifer, and his sisters, Mona, Marcia, and Melanie. His brother David preceded him in death. If you so choose, we suggest memorials be made to the American Heart Association. Buddy had Cardiac By-Pass surgery a few years ago and healthy hearts were important to him.

James Austin Freeman II, we called him &#8220;Buddy&#8221;, died Friday, May 29, 2020. A private graveside funeral will be held in the coming days at the LDS Cemetery in Society Hill. Todd Hardee will bring his eulogy, Chuck Black and Jimmie... View Obituary & Service Information

The family of Buddy Freeman created this Life Tributes page to make it easy to share your memories.

Customized sympathy cards. Mailed for you.