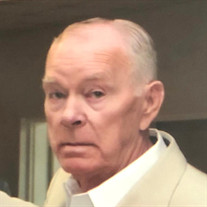 Darlington, South Carolina Cecil Ray Blackmon, age 82, a life-long resident of Darlington, SC passed away peacefully at his home on Saturday, June 27, 2020. Cecil, as his friends knew him, was born April 19, 1938 in Darlington, SC and was the son of the late William Francis Blackmon, Sr., and the late Ruby O’Neal Blackmon, both of Darlington and brother to the late William Francis Blackmon, Jr. and the late Patricia Blackmon Huggins, of Darlington. As a boy, Cecil attended Darlington County Schools and as a teenager in 1954, joined the United States Army where he served six years as a Signal Corp Signalman in Alaska and at Fort Bragg, North Carolina. After the Army, Cecil returned to Darlington where he began his employment with Pee Dee Electric Cooperative and retired in 1990 after 27 years with the company. Mr. Blackmon was a charter member of Faith Free Will Baptist Church in Darlington, and the Chapter 11 DAV of Florence, SC. He was a great Eagle Scout Mentor to his grandson, T.J. Byrd and was best known by everyone for his love of home, family, generosity to others and gentle nature. Cecil enjoyed Southern nostalgia, classic cars, music, antiques, and all things made in the United States of America. He was a true patriot at heart. Cecil is survived by his loving wife, Brenda Langley Blackmon of Darlington, their three children, Tony (Kate) Blackmon, Tim (Christie) Blackmon, and Kelley (Tony) Byrd; and their seven grandchildren, William Blackmon, Stephen Blackmon, Kathleen Blackmon DuBoise, Terrha S. Lee, Hali B. Greene, T.J. Byrd and Caroline Byrd Kahn; and eight great grandchildren. Funeral services will be held on Tuesday, June 30, 2020 at 11 AM at Kistler-Hardee Funeral Home Chapel. Mr. Blackmon will be laid to rest at the Florence National Cemetery. Memorials may be made to Faith Free Will Baptist Church, 1309 Lamar Highway, Darlington, SC 29532. Family and friends are invited to sign the online guest book at www.kistlerhardeefuneralhome.com

Darlington, South Carolina Cecil Ray Blackmon, age 82, a life-long resident of Darlington, SC passed away peacefully at his home on Saturday, June 27, 2020. Cecil, as his friends knew him, was born April 19, 1938 in Darlington, SC and was the... View Obituary & Service Information

The family of Cecil R. Blackmon created this Life Tributes page to make it easy to share your memories.

Send flowers to the Blackmon family.