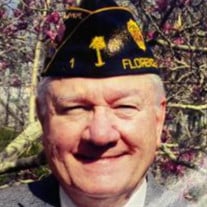 Charles Albert Bethea 4/9/1943 - 6/5/2022 Charles ‘Charlie’ Albert Bethea passed away on Sunday, June 5, 2022, at his home in Darlington, South Carolina at the age of 79. Charlie was born in the McLeod Infirmary in Florence, SC on April 9, 1943, the son of Dr. William Spinks Bethea, Jr. and Mrs. Florence Manning Bethea. He is preceded in death by his grandparents, Lawrence Albert Manning, Minnie Holland Manning, William Spinks Bethea, Sr. and Mary Belle Manning Bethea; his siblings Florence Manning Bethea Squires, William Spinks Bethea, Jr., James Lawrence Manning Bethea; and his daughter, Lynn Luckey Moody. Charlie is survived by his wife, Janice Thompson Bethea of Darlington, his former wife, Patricia Segars (Goz) of Hartsville; his children William Benjamin Bethea (Tamela) of Hartsville, P. Ellen Bethea of Hartsville, his son-in-law Marshall Scott Moody of Walterboro; his grandchildren Jack Edward Bethea of Hartsville, Kathryn Ellis Bethea of Hartsville, Ericka Lauren Robinson of Hartsville, Sophia Grace Krawiec of Hartsville, Audrey Kate Krawiec of Hartsville, Janice Elizabeth Moody of Annapolis, MD, Marshall Scott Moody, Jr. of Walterboro; and his niece Gretchen Squires Allen of San Diego, CA, and his nephew Robert W. Squires, Jr. of Orlando, Fl. Charlie attended Latta High School, studied at Wofford College, and served in the Navy on the nuclear-powered warship the USS Truxtun DLGN-35 during the Vietnam War from 1964-1969. While onboard the Truxtun, Charlie and the Truxtun crew, along with the aircraft carrier the Enterprise, were deployed to the Sea of Japan in response to North Korea's seizure of the American ship the Pueblo. He worked most of his career for Carolina Power and Light as a Senior Control Room Operator and Senior Training Manager. Charlie was a man of strong Christian faith and was an active member of the Trinity United Methodist Church serving as an usher, Sunday school teacher, Treasurer and Deacon. Over the years, Charlie volunteered driving the church van transporting the group of ladies who fondly called themselves ‘Charlie’s Angels’. As a loyal member of the American Legion in Florence, SC, Charlie volunteered in many roles. He served as Treasurer and Commander of the 7th District. The American Legion awarded him the National Achievement Award in 2017 for his distinguished service. He also served his community as a member of the Kiwanis Club. He was an avid fisherman and enjoyed spending time with friends in quest of catching the ‘big one’. He ran in the Cooper River Bridge Run 25 consecutive years along with various other races. He was also a long-time member of the Fitness Forum. He enjoyed time with his grandchildren, who affectionately called him ‘Grumps’. Funeral services will be held on Thursday, June 9, 2022 at 11 AM at Trinity United Methodist Church. The family will receive friends following the service at The Grand Old Post Office. Lunch will be served. Burial will be held at 2 PM at Grove Hill Cemetery on Thursday, June 9, 2022. Memorials may be made to Trinity United Methodist Church, PO Box 16, Darlington, SC 29540, American Legion Post 1 (Baseball Team), 3631 E. Palmetto Street, Florence, SC 29506, or to Lynn L. Moody Endowment for Mental Health & Suicide Prevention, 66 George Street, Charleston, SC 29424. The Directors of Kistler-Hardee Funeral Home are honored to be serving the Bethea family. The Bethea family cordially invites all Charlie's friends to lunch immediately following the funeral at The Grand Old Post Office across the street. This was Charlie's wish.

The family of Charles Albert Bethea created this Life Tributes page to make it easy to share your memories.

Send flowers to the Bethea family.