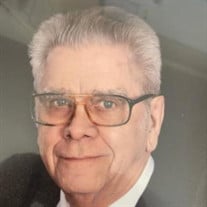 Darlington, South Carolina Charles Douglas Mims, 91, of Darlington died on Sunday, March 7, 2021. Graveside services will be held on Tuesday, March 9, 2021 at 11 AM at Grove Hill Cemetery, directed by Kistler-Hardee Funeral Home. Mr. Mims was born in Florence County. He was the son of the late Charles Book and Maggie Hill Mims. He attended Lydia High School where he played basketball. After high school he enlisted in the United States Navy. As a Navy Corpsman, he served in Korea. He was wounded and received a Purple Heart. He returned to Darlington where he would live the rest of his life. He coached Little League Baseball for many years. He retired from Sonoco after 44 years of service. He was a dedicated member at Trinity United Methodist Church, and the Asbury Men’s Sunday School Class. Surviving are his wife, Doris Tindall Mims of Darlington; his daughter, Karen Mims Barber and husband, Jerry; grandchildren, Mark Barber, Jake Mims and wife, Casie; great grandchildren, Mabry and Hampton Mims. Charles was preceded in death by his parents, Charles Book Mims and Maggie Hill Mims; his son, Charles Douglas Mims, Jr.; his sisters, Margaret Johnson, Eunice McFarland, Grace Jordan, his twin sister, Charlotte King, Lib Lee and Jeanette Mims; and his brothers, Gary Mims, Dwight Mims, and Joe Mims. Memorials may be made to Trinity United Methodist Church, PO Box 16, Darlington, SC 29540. Family and friends are invited to sign the online guest book at www.kistlerhardeefuneralhome.com

The family of Charles Mims created this Life Tributes page to make it easy to share your memories.

Send flowers to the Mims family.