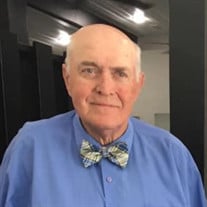 Lamar, South Carolina Charles Wayne Weaver, 80, of Lamar died on Monday, April 5, 2021. Graveside funeral services will be held at 11:30 AM Wednesday, April 7, 2021 at Florence National Cemetery, directed by Kistler Hardee Funeral Home of Darlington. Wayne was the son of the late Charlie Ham and Sudie Freeman Weaver. He served his country in the United States Army. Wayne, along with his wife, Nelia owned and operated Nelia’s Restaurant in Lamar for many years which was known for their “famous” fried chicken. He was a member of the American Legion, lifetime member of Lamar Masonic Lodge # 287 and the Omar Shrine Temple (Omar Clowns Unit). Wayne loved supporting his favorite football teams the Lamar Silver Foxes and the Carolina Gamecocks. He was a member of Lamar United Methodist Church. Wayne enjoyed working part time at Kistler-Hardee Funeral Home in Lamar and riding his golf cart around town visiting his friends. He loved God, his family, his friends and will be dearly missed by all. Surviving are his wife, Nelia Weaver of Lamar; his sons, Jody Weaver and wife, Michelle and Chuck Weaver and wife, Wendy; his grandchildren, Emily Weaver, Caitlyn Weaver and Wesley Weaver; his brothers, Chandler Weaver, and Wendell Weaver; and his sister, Susan Sansbury. Wayne was preceded in death by his granddaughter, Hagan Weaver and by his brothers, Rodney Weaver and Donald Weaver. Memorials may be made to Wreaths Across America, PO Box 249, Columbia Falls, ME 04623. Family and friends are invited to sign the online guest book at www.kistlerhardeefuneralhome.com

The family of Charles Wayne Weaver created this Life Tributes page to make it easy to share your memories.

Send flowers to the Weaver family.