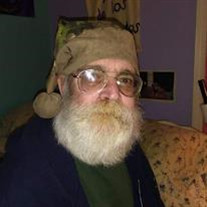 Edward Frank Garrity, 66, passed away on the morning of February 6 in Florence, South Carolina, at Regency Hospital, near his home in Hartsville, where he’d spent the last several years living with his family. Ed was born to James and Patricia Garrity on August 18, 1953 in Landstuhl, Germany, where his father served in the U.S. Air Force. After returning to the U.S. and living in Michigan for several years, the family moved to Miami, Florida. There Ed marched in the Orange Bowl Parade, graduated from Killian High School, honed his skill as a musician, and later survived Hurricane Andrew in 1992 (a fact of which he was quite proud). Even through the hardest times, he never lost his sense of humor, using it with love. He was loved by everyone and made friends easily. Edward studied engineering at the University of Florida, and was a loyal Gator fan his whole life. He enthusiastically helped instill in those around him a love for music, particularly The Beatles, as well as classical music. He never failed to recite, word for word, any Beatles song you could think of. He enjoyed woodworking and was an avid reader and student of history and science. Edward is survived by his parents, James and Patricia Garrity of Branford, FL; His sons, James Garrity of Asheville, NC, Ewoin Garrity of Homestead, FL, Devin Mercado (Garrity) of Hartsville, SC; His sisters, Kathleen Tuttle (Robert) of Max, NE, Laura Harding of Homestead, FL, Genevieve “Genny” Garrity of Hartsville, SC and Mary Mason of Shawnee, KS (Roger); nephew David Garrity of Hartsville, SC and niece April Garrity of Lansing, MI, to whom he was like a father; and six grandchildren, many other nieces, nephews, and cousins, as well as special family friend Bob Kadunc of Hartsville, SC.

Edward Frank Garrity, 66, passed away on the morning of February 6 in Florence, South Carolina, at Regency Hospital, near his home in Hartsville, where he&#8217;d spent the last several years living with his family. Ed was born to James and... View Obituary & Service Information

The family of Edward Garrity created this Life Tributes page to make it easy to share your memories.

Edward Frank Garrity, 66, passed away on the morning of February...

Send flowers to the Garrity family.