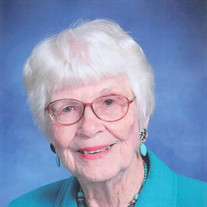 Esther Huggins Cook, 104, went to be with the Lord, peacefully, on February 23, and was surrounded by her loving family. Funeral services will be held at 12:00 p.m. on February 26, 2022 at Trinity United Methodist Church in Darlington, with Pastor Will Altman officiating. Interment will follow at the Darlington Memory Gardens, directed by Kistler-Hardee Funeral Home. The family will receive friends one hour prior to the service in the church parlor. Esther was the daughter of the late George M. Huggins and Elberta Gore Huggins. She was born on Easter Sunday, April 8, 1917 in Galivants Ferry, S.C. She grew up in Aynor, and graduated from Aynor High School in 1934. She worked for her Father and Mother in their Aynor Dry Goods Store, and during World War II while her husband, John, served in the Armed Forces European Theater overseas, Esther worked at the Aynor Post Office as a postal clerk. After John returned home from overseas, they eventually bought a farm in Darlington County and, with their young family, moved to Darlington. Esther went to work for B.C. Moore and Sons on the Square in Darlington, dressing many ladies in the Pee Dee area with the latest fashions, and retired after 25 years of service. Esther was a devoted member of Trinity United Methodist Church for over 55 years, and was a member of the former Phillips Bible Class, which she held so dear to her heart. During her years in the Phillips Class, she served as president, secretary, corresponding secretary, and pianist. She later became a member of the Trinity Women’s Bible Class. Trinity was a very special and important part of her life. Esther loved her family, her church family and friends, and she was adored by all. For many years, she held a traditional Thanksgiving dinner at her home, with as many as 35 loved ones coming with their special covered dishes. Her hobbies were working in her vegetable garden, reading, working on her daily crossword puzzles, walking, and writing in her daily journal. Her most treasured love was playing her piano, and it was on the same family piano where she first struck the key at the age of three. Esther had such a gift of music, and she was so blessed to live a long full life. Surviving are her loving children; three daughters, Gail Cook Allen and Dianne Cook Todd of Darlington, S.C., and Delores Cook Muckenfuss (Elmer Lee) of Georgetown, S.C.; two sons, Joseph Albert Cook (Martha) of Anchorage, Alaska, and Gary Thomas Cook of Xenia, Ohio. She is also survived by her 12 adoring grandchildren; Bart Andrew Allen, Melinda Allen Sansbury, Alex Jennings Allen, Tammy Cook Shanesy, Tina Cook Collier, Bobbi Cook Brown, Alvious Dean Adams, Michael Neil Adams, Brett Allen Calcutt, Chadwick Byron Todd, Cameron Mitchell Todd, Elizabeth Ann Cook; lovingly remembered as Granny Cook by her 24 special great-grandchildren and 10 great-great grandchildren, and she held a very special place in her heart for families’ spouses, extended family and friends, and a host of many special nieces and nephews. She was preceded in death by her parents, her husband of 59 years, John Anderson Cook, her son, John Michael (Mike) Cook; sisters, Jewel Huggins Rogers, Joyce Huggins Graham, twin sister, Ruth Huggins Lewis; brother, George M. Huggins, Jr.; granddaughter, Resia Cook Wood, daughter-in-law, Delores (Dee) Cook, son-in-law, David Todd, and a dear son-in-law, Jennings Allen. Esther so loved being independent, but when she was unable to take care of herself any longer near the age of 100, her loving daughter, Gail, took her into her home next door, and showered her with her devotion and tender, loving care through the remainder of her days. Our family is so grateful for Gail’s love and wonderful care shown to our mother these past years. Esther’s beautiful granddaughter, Melinda, will deliver her Eulogy in memory of her beloved Grandmama. At our mother’s request, memorials may be made to Trinity United Methodist Church Budget or Choir funds, P.O. Box 16, Darlington, SC 29532. *The funeral service for Esther Cook was live streamed and published on the Trinity United Methodist Church Facebook page.*

Esther Huggins Cook, 104, went to be with the Lord, peacefully, on February 23, and was surrounded by her loving family. Funeral services will be held at 12:00 p.m. on February 26, 2022 at Trinity United Methodist Church in Darlington, with... View Obituary & Service Information

The family of Esther Huggins Cook created this Life Tributes page to make it easy to share your memories.

Send flowers to the Cook family.