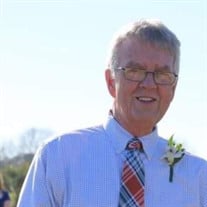 Franklin David “Danny” Weaver, Jr., 80, of Darlington died on Monday, July 26, 2021 peacefully at his home surrounded by his family. Funeral services will be held on Thursday, July 29, 2021 at 4 PM at the First Church of God, 620 North Main Street, Darlington, South Carolina. Military Honors will follow at The Darlington Veterans Park located on the Public Square. Interment will follow at Grove Hill Cemetery. The family will receive friends from 6 PM until 8 PM on Wednesday, July 28, 2021 at Kistler Hardee Funeral Home and at all other times at the residence. Danny was born in Darlington, South Carolina. He was the son of the late Franklin David and Aleen James Weaver. He graduated from St. John’s High School in the class 1959. He never lost his love for the Blue Devils and followed in his father’s footstep by filming all the home games for many years. Following high school, Danny began serving his country in the United States Navy. He later retired from The South Carolina Army National Guard where he was a medic. His Medic duties were aboard The Huey Helicopter and he was very proud of this. His military duties, and the love for his country did not cease when he retired. He remained a member of The American Legion Post # 13 and the NCO Club. A few years ago the idea was put forth that Darlington would erect a permanent memorial to local veterans. Danny served an intricate role in making this project come to fruition. The Darlington Veterans Memorial Park stands proud today in the heart of Darlington thanks to his shared efforts. Danny had a deep rooted faith. He was a member of The First Church of God and had served his church in many capacities over the years. Danny worked for many years at ESAB. He had a passion and a gift for welding and steel fabrication. Although his job was in management, his knowledge of the industry was quite vast. Following his retirement he was instrumental in the formation of DSI Metals, Inc. He passed his passion and his knowledge on his son, Jake, who continues this company today. Surviving are his wife, Tonda West Weaver of the home; his children, Scott Weaver and wife, Amy, Jonathan Weaver and wife, Shelly, Cherelle Weaver Whitfield and husband, Eddie, and Jake Mims and wife, Casie; his brother, Grady Weaver and wife, Fran; his nieces, Lezlie Weaver and husband, Gil, Mardi Kemp, and Sonja Paulk and husband, John; and his nephew, Cliff Kemp; his step mother, Sadie Phila Weatherford Weaver; and his father and mother -in- law, Freddie and Martha West; his grandchildren, Ashley Montrose, Tyler Montrose, Bradley Bish, Maitland Weaver, Emi Weaver, Preston Bibler, Bailey Bibler, Kylie Bibler, Hamp Mims and Mabry Mims; 5 great grandchildren; Memorials are suggested to the Darlington Veterans Memorial, Post Office Box 62, Darlington, SC 29540, The McLeod Children’s Hospital, 555 E. Cheves Street, Florence, SC 29506, to The Lord Care’s Ministry, PO Box 1457, Darlington, SC 29540 or to the First Church of God, 620 N. Main Street, Darlington, SC 29532. Following the service the funeral procession will proceed to The Darlington Veteran's Memorial Park (located on the Public Square) Military Honors will be rendered. Friends are asked to park in the Trinity United Methodist Church parking lot or the public parking area on Orange Street.

The family of Franklin D. "Danny" Weaver Jr created this Life Tributes page to make it easy to share your memories.

Send flowers to the Weaver family.