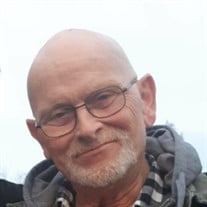 Myrtle Beach, South Carolina Frederick “Fred” John Wood, 70, of Myrtle Beach, SC. Formerly of Corinth, New York resident Frederick John Wood, died November 20, 2020, at his daughters home in Hartsville, South Carolina surrounded by his loving family. His battle with cancer over the past seven and half years showed his courage of facing life challenges with a smile. Despite the pain, Fred was a hero, and stayed strong until the end. Fred graduated from Hadley Luzerne High School in 1968. After high school Fred married the love of his life, Debbie. They just celebrated their fifty second anniversary this past September 1sr. Fred joined the United States Navy in 1969. Serving aboard the USS Shangri-La and later the USS Saratogo, which took him to Vietnam in 1972. He was discharged from the Navy in 1973. Fred worked for General Electric in Schenectady for 20 years and then at Wesley Health Care Center in Saratoga for another 20 years before retiring. Fred enjoyed camping, car racing, and was a lifetime fan of New York Giants. Most importantly Fred enjoyed spending time with his family and his friends, that he considered as his family. Everyone that met Fred loved him. He was an extremely loving and caring man. Fred will be missed by all. Fred is predeceased by his parents, Howard and Eleanor Wood of Luzerne, his sisters, Virginia “Ginger” Farr and Janet Wood. A brother, William “Billy” Wood, father-in-law, Joseph Kiselica and son-in-law, Wesley Mount. Survivors besides his wife, are sons Frederick Joseph Wood of Myrtle Beach, South Carolina, Nathan (Pamela) Wood of Conway, South Carolina, daughter, Jennifer Wood-Mount of Hartsville, South Carolina. Also 2 grandsons that were raised as his own sons, Nathaniel (Tiffany Causey) Wood of Conway, South Carolina and Timothy (Harley) Wood of Loris, South Carolina. Brothers, Robert (Carol) Wood of Keller, Texas, Howard “Skipper” (Joanna) Wood of Corinth, New York, Virgil (April) Wood of Gansevoort, New York, a sister, Eunice Brady of Fort Edward, New York and mother-in-law, Yvonne Kiselica of Corinth, New York. Along with several grandchildren, great grandchildren, 2 unborn great grandchildren and lots of nieces, nephews and cousins. Special thanks to hospice of McLeod Health, Florence, South Carolina. His wife would like to give a special thanks to our grandson, Noah who spent nights at the hospital with him and helped in so many other ways. Special thanks also go out to our daughter, Jennifer and her children for opening their home to us and allowing him to spend his final days there and allowing our family to be with us. Our son Nathan who also helped care for his Dad and our family too. Also, a special thank you to Nathaniel for his help caring for his “Dad” and all the other help he gave. As well as Lisa, Abigail, Alexis and Tiffany for all that you did for him and being there for us. There were so many that came and helped care for Fred in some way. I thank each and everyone of you. Services will be held on Tuesday, December 1, 2020 at 2 PM at the Florence National Cemetery, 803 E. National Cemetery Road, Florence, South Carolina 29506. There will also be a celebration of his life in New York at a later date to be provided by the family. In lieu of flowers the family suggest that you donate to the American Cancer Society in Fred’s name. Arrangements are being directed by Kistler-Hardee Funeral Home and Crematory of Darlington.

The family of Frederick John Wood created this Life Tributes page to make it easy to share your memories.

Send flowers to the Wood family.