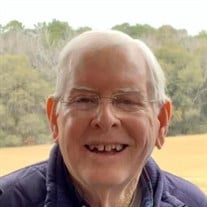 Harold G. Isgett, 76, of Hanahan died on Wednesday, June 8, 2022, at McLeod Hospice House in Florence. A memorial service will be held at 2pm on Saturday, June 18, 2022, at Highland Park Baptist Church in Hanahan. The family will receive friends following the service in the fellowship hall of the church. Harold was born on November 25, 1945. He was the son of the late Eugene Raymond and Fema Kirby Isgett. He was born in Florence and graduated from Chicora High School in North Charleston. Throughout his career, he held various positions, but it wasn’t until he joined the Hanahan Police Department that he found his true calling. While in law enforcement, he was able to do what he knew how to do best…help others. The position he enjoyed the most was his time prior to his retirement as a School Resource Officer. He received many accolades for his service with law enforcement and community. Many of his cherished acknowledgments included the Charlie Hall Red Apple Award and the Palmetto Patriot awarded from our former Lt Gov Andre Bauer. Harold was a longtime member of Highland Park Baptist Church where he assisted in many leadership roles, but more importantly, enjoyed worshipping with his friends and family. He was the father of four boys, Harold G. Isgett, Jr., who passed away in 1974, John T. Isgett of Darlington, Stephen Ryan Isgett (Daphne) of Summerville and Adam Isgett of Hanahan. He always considered Michelle Semlitsch (Eddie) of Norfolk, VA as his one and only daughter. He is also survived by his wife Helen of Winnsboro, two nephews, Buddy and Danny Isgett, and one niece, Vickie Sais, from his late brother, Raymond Isgett (Carol). He had six grandchildren, Sarah (25), John (22), Sydney (14), Wayne (13), Baylee (9) and Connor (7). In lieu of flowers, memorials may be made in memory of Harold to the Hanahan Exchange Club or Hanahan Fraternal Order of Police. Family and friends are invited to sign the online guest book at www.kistlerhardeefuneralhome.com

Harold G. Isgett, 76, of Hanahan died on Wednesday, June 8, 2022, at McLeod Hospice House in Florence. A memorial service will be held at 2pm on Saturday, June 18, 2022, at Highland Park Baptist Church in Hanahan. The family will receive... View Obituary & Service Information

The family of Harold Isgett created this Life Tributes page to make it easy to share your memories.

Send flowers to the Isgett family.