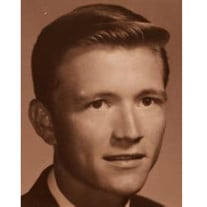 Jackie (Jack) H. Arnold, 76, died Tuesday, November 26, 2019 at his residence in Manassas, Virginia, following a brief illness. He leaves behind his wife of 47 years, Brenda (Pelletier) Arnold; two sons, John (Maura) and Tony (Candace); two daughters, Theresa Brown and Tracy (Charlie) Thompson; and a brother, Bobby (Ann); 14 grandchildren; and 3 great grandchildren. Born and raised in Darlington, SC, he was the youngest son of John C. and Kate (Huntley) Arnold. After graduating from Saint John’s High School in 1961, he attended Clemson University, graduating in 1966 with a bachelor's degree in Agricultural Engineering. He met his wife, Brenda, while working for DuPont in Kinston, North Carolina, and they were married in 1971 at LaGrange United Methodist Church. Mr. Arnold worked for many years in commercial construction as a superintendent. In the late 1970’s he returned to the family farm for a few years. In the mid 1980’s, he returned to his first love, commercial construction, where he had much success with large complex projects. Mr. Arnold was an avid fan of Clemson Tiger football, as well as NASCAR racing. A memorial service will be held Saturday, December 14, 2019 at 4:00 pm in the Chapel of Kistler Hardee Funeral Home. In lieu of flowers memorials may be made to the American Cancer Association.

The family of Jackie “Jack” Huntley Arnold created this Life Tributes page to make it easy to share your memories.

Send flowers to the Arnold family.