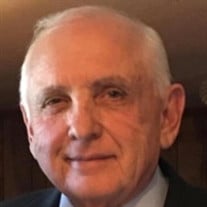 Corporal James Christopher Stanley (USMC-Retired) (71) of Darlington SC died at his home surrounded by his family on June 12, 2020. A Celebration of Life service will be held Tuesday, June 16, 2020 at 11:00 am directed by Kistler-Hardee Funeral Home. This celebration will be held at his home located at 1137 Indian Branch Road, Darlington as per his wishes. Interment will be held at a later date in a private ceremony at Grove Hill Cemetery. Chris, as he was known, was born in Florence, SC a son of the late James Francis Stanley and the late Lillian Ethel Andrews. He joined the United States Marine Corps and was a Vietnam Conflict era veteran. He earned the Purple Heart and Bronze Star while serving his country. Chris lost both legs in combat but that did not stop him from becoming an avid scratch golfer. After returning from Vietnam, he married his childhood sweetheart (Barbara Welch) and raised his two children. He attended Francis Marion University and worked in the Finance business prior to his retirement. He was preceded in death by his precious wife, Barbara Welch Stanley; both parents and his first granddaughter, Randi Michelle Gainey; two nephews David Stanley and Preston Stanley. Left to cherish his memories are his daughter, Samantha (Terry) Gainey, his son, James Christopher “Jamie” Stanley, Jr; grandchildren, Dr. Jordan Gainey of Iowa City, IA, Joshua Gainey of Beaufort, SC, Dani Gainey, of Darlington, SC, Kinsley Stanley and Savannah Stanley of Florence SC; his brother, David Stanley of Darlington, SC and his sister, Debbie (Ray) Snider of Darlington, SC. and several sisters-in-law; nieces, nephews, great nieces, and great nephews. This ceremony is open to anyone who would like to attend. It will be held on the patio area of the home and the dress is casual. Family and friends are invited to stop by and visit at 1137 Indian Branch Road, Darlington SC at other times.

Corporal James Christopher Stanley (USMC-Retired) (71) of Darlington SC died at his home surrounded by his family on June 12, 2020. A Celebration of Life service will be held Tuesday, June 16, 2020 at 11:00 am directed by Kistler-Hardee Funeral... View Obituary & Service Information

The family of James Christopher Stanley created this Life Tributes page to make it easy to share your memories.

Send flowers to the Stanley family.