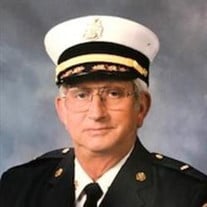 Darlington, South Carolina James (Jim) Casper Stone, Jr., born in Darlington, South Carolina on December 22, 1940 to James Casper Stone and Ray Rhodes Stone, passed away peacefully, surrounded by his family, on Thursday, February 7, 2019. Chief, as he is respectfully and affectionately known, also holds the title of Coach, Church Servant, Husband, Daddy, Bo, Mr. Darlington and Friend to all. As a child, he chased fire trucks and as a teen, he became a track star at his beloved alma mater, St. John’s High School (Class of ’59) and still holds a state record. He attended the University of South Carolina on an athletic scholarship. While studying, he heard his unit with the South Carolina National Guard called to duty; he shut the book and served during the Cuban Missile Crisis of which he later transferred to the Air Force Reserve to continue and fulfill his obligation to the United States Military. At the end of his military career, he returned to Darlington and went to work, alongside his father, at the Coca-Cola Bottling Company. In 1962, he joined the Darlington Fire Department which evolved into a 50-year commitment to follow his dreams of being a firefighter, rising quickly through the ranks of Engineer, Captain and Assistant Chief and was the department’s first recipient of the Fireman of the Year Award. In 1984, he was promoted as the City of Darlington’s first full-time Fire Chief fulfilling and living his dream every day until his retirement in 2012. Chief also served on Darlington County Council as Councilman, Vice-Chairman and Chairman, the Pee Dee Council of Government and Executive Board, was a founding member of the Darlington Youth Football League and served as a coach in the Dixie Youth Baseball program for many years. He served on the 911 Communications Study Committee and was influential in implementing the system for Darlington County. He was also involved with the American Legion Post 13, St. David’s Masonic Lodge, Darlington Downtown Revitalization Association, Darlington Raceway’s Ambassador Club and the Darlington Veteran’s Memorial. Chief, a lifelong member of First Baptist Church, enjoyed serving on the property, personnel and stewardship committees over the years and was currently serving as a trustee. Preceded in death by his parents and a sister, Carolyn Stone Godwin, and a son, James C. (Jay) Stone, III, he is survived by his wife of 53 years, Dot Autry Stone and children and grandchildren who adored him, Angie (Ken) Godbold, Jacey Stone (Jeff Burr), and Jason (Jen) Stone; his grandson Stone Godbold, and three granddaugthers, Raychel, Leah and Jenna Stone; his niece, Joanna (Tony) Hall and nephews Joey (Sheree) Godwin and Jim (Shannon) Godwin; special cousin, Libby West and numerous cousins, great-nieces and nephews. Over the years, Chief received many awards and accolades; however, the most recent, 2018 Legionnaire of the Year for Post 13, was the most meaningful as he was recognized before he was hospitalized. Chief Stone will lie in state in the rotunda of the Darlington County Courthouse on Saturday, February 9, from 4pm – 8pm with his family joining him from 6pm-8pm for visitation. Funeral services will be at First Baptist Church on Sunday February 10, 2019 at 3pm with burial immediately following in Grove Hill Cemetery. Memorials are suggested to Darlington Veteran’s Memorial, c/o Danny Weaver, PO Box 62, Darlington, SC 29540. Kistler-Hardee Funeral Home is in charge of the arrangements.

The family of James Casper Stone Jr. created this Life Tributes page to make it easy to share your memories.

Send flowers to the Stone family.