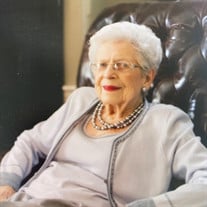 Columbia, SC Jean Ellis Altman Jean Ellis Altman passed away peacefully on April 5, 2022, at McLeod Hospice House in Florence, South Carolina. She was born May 25, 1925, in High Springs, Florida, the only child of the late Ouida Getzen Ellis and Otis Lorenzo Ellis. As a child, she enjoyed visiting her many cousins in the small towns of Fort White, Lakeland, and Ocala, Florida. After graduating from Alachua High School, she attended Florida State College for Women and graduated from New York Institute of Dietetics. Her career eventually took her to a position at the infirmary at the University of Florida where she met the love of her life, Robert (Bob) Morris Altman. After they were married, Bob continued his career as an officer in the US Army. Jean loved the life of a military wife and enjoyed supporting Bob in his career. They enjoyed travelling extensively, both during his army career and afterwards. She enjoyed cooking for others, trying new recipes, and loved entertaining. She also enjoyed meeting new people, playing bridge, and discovering new places. They eventually retired to Columbia, South Carolina to devote as much time as possible to their children, Greg and Linda, and especially, their grandchildren, Lenore and Neil. They never missed any special occasion where they could show their support and love for them. She was a member of the greatest generation and will be remembered for her strong love for her country and dedication to her family. She was predeceased by her husband, Col. Robert Morris Altman, US Army, retired. She is survived by her son, Robert Gregory Altman (Ann) of Greenville, SC and her daughter, Linda Altman Wilson (Cliff) of Florence, SC. She is also survived by her grandchildren, Lenore Mize Wilson Cusick (Chad), and Clifton Neil Wilson (Megan) and great-grandchildren, Henry Clifton Cusick, James Altman Wilson, Milly Brooks Wilson, and Charlotte Carolyn Cusick. The family expresses much gratitude to the caregivers at the Manor and the McLeod Hospice House. Funeral services will be held at Arlington National Cemetery at a future date. In lieu of flowers, those wishing to honor her life can make donations to the McLeod Hospice House, 1203 E. Cheves St. Florence, SC 29506. The Directors of Kistler-Hardee Funeral Home are serving the Altman family.

The family of Jean Ellis Altman created this Life Tributes page to make it easy to share your memories.

Send flowers to the Altman family.