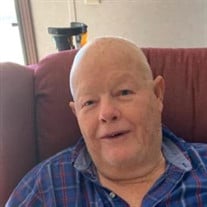 Jeff Howard “Jerry” Bryant, Jr., 77, of Darlington died on Thursday, June 17, 2021 at his home surrounded by his family. A memorial service will be held Sunday at 2 PM in the chapel at Kistler Hardee funeral home. The family will received friends following the service. Jerry was born and raised in Darlington, South Carolina. He was the son of the late Howard and Greta Register Bryant. He and his wife of 57 years, Sandra, raised a family, built a business, and later retired to enjoy the fruits of their labor. Jerry and Sandra had three children and five grandchildren. He and his boys enjoyed go-cart racing when they were younger and Jerry made sure they were good at it. He always provided them the best equipment he could build. He always enjoyed his time with Jennifer as she rode with him up and down the road, hauling cars, and attending auctions. This was their time and they both enjoyed it very much. Jerry Bryant's Used Cars and Bryant's Auto Transport, Inc. , were the two businesses he built. After over 40 years, he retired. When the grandchildren came along Jerry had mellowed a bit, and shifted his attention to them. He loved taking them fishing, and he took them on his boat named after his little girl, "Miss Jennifer". Sunday dinners were a big part of Jerry's life. He loved having his entire crowd there, and every time one went to leave, he would say to them, "Lord be with you". Jerry never met a stranger and knew almost every person in Darlington. He had built many friendships over the years but none more special than the lifelong friendships shared with Glenn Hannah, Lee Tucker, and Johnny Garland. He also had many friends in the car business, both dealers and customers. Surviving are his wife, Sandra Jones Bryant; his children, Jeff Bryant, Jody Bryant, and Jennifer Bryant Andrews and husband, Ricky; his grandchildren, Jordan Bryant, Taylor Bryant, Tanner Bryant, Bryant Andrews, and Mackenzie Andrews; his brother, Mickey Bryant; his sister, Linda Crosby and husband, Steve. Jerry was preceded in death by his brothers, George Bryant and Jerald Bryant. The family suggests memorials be made to the American Heart Association, St. Jude’s Children’s Hospital, or to a charity of one's choice. "The Lord be with you, Papa" Your memory will forever be in our hearts. We love you!

Jeff Howard &#8220;Jerry&#8221; Bryant, Jr., 77, of Darlington died on Thursday, June 17, 2021 at his home surrounded by his family. A memorial service will be held Sunday at 2 PM in the chapel at Kistler Hardee funeral home. The family will... View Obituary & Service Information

The family of Jerry Bryant created this Life Tributes page to make it easy to share your memories.

Send flowers to the Bryant family.