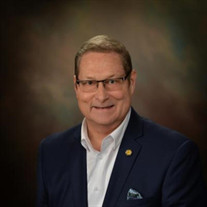 John P. Gardner, Jr. On November 22, 2020, John P. Gardner. Jr. was welcomed into the arms of his Heavenly Father after a three year battle with cancer. For any who knew him, this was the realization of a life-long communion with God here on... View Obituary & Service Information

The family of John Pickens Gardner Jr created this Life Tributes page to make it easy to share your memories.

Send flowers to the Gardner family.