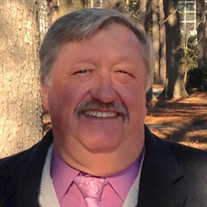 Hartsville, South Carolina John Wayne McLeod, 62, of Hartsville died on Thursday, December 30, 2021. A celebration of life service will be held on Sunday, January 2, 2022 at 2 PM in the Chapel of Kistler-Hardee Funeral Home. The family will receive friends from 1:00 until 2:00 PM on Sunday at the funeral home and any time at the home. John was born in Florence, South Carolina. He was the son of Perry McLeod and the late Betty Braddock Hawkins. John served his country in the United States Navy from 1978 until 1982 and afterwards served in the Army National Guard from 1986 to 1996. He had a heart of a servant and retired after 25 years with the Darlington County Sheriff’s Office as Captain over the Criminal Investigation division. After retirement John went to work with the Darlington County Coroner’s Office where he served in many different capacities. John also accomplished a lot in his lifetime one of his proudest moments was when he graduated with his Bachelor’s Degree from Coker University and later with his Master’s Degree from St. Leo University. He loved his family, his friends and will be missed dearly. Surviving are his wife, Tina M. McLeod; his children, Wayne McLeod, Jason McLeod (Alison) and Bridgette Dixon (Darren); his step son, Alex Perkinson; his step daughter, Brittany Chadwick (David); his grandchildren, AJ McLeod, Haley McLeod, William McLeod, Meygan McLeod, Adelaide Dixon, Margot Dixon and Bryson Chadwick; his great grandchildren, Gabrielle McLeod and Haidynn Josey; his brother, Tommy McLeod; and his sister, Vicki Lavender (Joey); many loving nieces and nephews; special sister, Audrey McCaskill; and special friend, Susie Sportiello. In lieu of flowers memorials may be made to a charity of one’s choice. Family and friends are invited to sign the online guest book at www.kistlerhardeefuneralhome.com

Hartsville, South Carolina John Wayne McLeod, 62, of Hartsville died on Thursday, December 30, 2021. A celebration of life service will be held on Sunday, January 2, 2022 at 2 PM in the Chapel of Kistler-Hardee Funeral Home. The family will... View Obituary & Service Information

The family of John Wayne McLeod created this Life Tributes page to make it easy to share your memories.

Send flowers to the McLeod family.