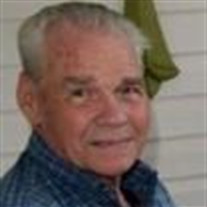 Lamar, SC John “Tom” Edwin Windham, 82, of Lamar died on Sunday, August 27, 2017. Graveside services will be held on Wednesday, August 30, 2017 at 10 AM in Lamar Memorial Cemetery, directed by Kistler-Hardee Funeral Home and Crematory of Darlington. The family will be receiving friends following the service at the cemetery, and other times at the home of his daughter, Cynthia Collins. Tom was born on November 17, 1934 in Lamar, he was the son of the late Fred H. and Pearl McMillan Windham. He is remembered by many for his scholastic achievements as well as his athleticism. He was awarded a full football scholarship to Clemson College. Tom retired from farming and Sonoco Products with 32 years of service. He was quite the gardner and landscaper as his work was admired by many. Tom was a member of Lamar First Baptist Church. He loved his family dearly and enjoyed spending time with them. Surviving are his children, Cynthia (James Lamar) Collins, Melanie West and Russ (Tammy) Windham; his grandchildren, Chris (Danna) Collins, Holly Collins (Rob) Penny, and Thomas Windham; and his great grandchildren, Bennett Collins, Jameson Collins, Chandler Collins, Walker Penny, Collins Penny, and Ariana Windham. Tom was preceded in death by his wife, Carol Bacot Windham; his brothers, William “Bill” Windham, and Robert Windham; and by his sister, Millicent Peterson. Memorials may be made to Lamar First Baptist Church, PO Box 431, Lamar, SC 29069. Family and friends are invited to sign the online guest book at www.kistlerhardeefuneralhome.com

The family of John "Tom" Edwin Windham created this Life Tributes page to make it easy to share your memories.

Send flowers to the Windham family.