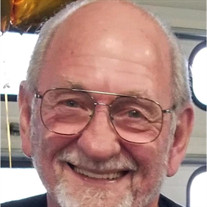 Joseph Aubrey Rush, 75, of Waldorf, Maryland departed this life unexpectedly on Tuesday, April 28, 2020 in Florence, South Carolina. He was struck by a vehicle while riding his treasured vintage bicycle. He was born April 19, 1945 in Alcolu, South Carolina to the late Fred G. Rush and Mary Louise Rush. Joe married the love of his life, Patricia Ann Rush, in 1981. Joe was a strong, loving, funny, and hard-working man who adored his family and many friends. He was a wonderful husband, father, grandfather, and great-grandfather. He always made sure they knew they were loved by him and attended all family celebrations. Joe was a great man who never knew a stranger, everyone was his friend. He would help anyone. He loved working in his yard, riding his Harley Davidson motorcycle, riding his vintage bicycles, traveling to Florence, South Carolina and the Florida Keys. He will be sorely missed by many, but none as much as his family. He served as a General’s Aide in Germany for the U.S. Army during the Vietnam War. In addition, he retired from Wonder Bread and from Pepperidge Farm. He was the co-owner of Happy Tracks Boarding Kennel in Waldorf, Maryland. Joe is survived by his wife, Patricia Ann Rush, his beloved children, Jack and Danielle Rush, Eddie and Vicki Estevez, Richard and Amie English and Eric and April Sjurseth. He is survived by 16 grandchildren, Frank, Madison, Hunter, Jonathan, Jessica, Jacob, Buddy, Andrew, Benjamin, Joshua, Donovan, Connor, Reed, Matthew, Kimberly, and Alexandra. In addition, he is survived by 11 great-grandchildren, Jacob, Makayla, Kylie, Nathan, Logan, Bella, Dominic, Shepard, Scarlett, Tyler, and Lucas. Joe is survived by two siblings, Ann Cole and Hugh Rush and extended family and friends. He is preceded in death by his parents, and sister, Jessie. At this time all services will be private due to COVID-19. The family will be planning a Celebration of Life later this year.

Joseph Aubrey Rush, 75, of Waldorf, Maryland departed this life unexpectedly on Tuesday, April 28, 2020 in Florence, South Carolina. He was struck by a vehicle while riding his treasured vintage bicycle. He was born April 19, 1945 in Alcolu,... View Obituary & Service Information

The family of Joseph Rush created this Life Tributes page to make it easy to share your memories.

Send flowers to the Rush family.