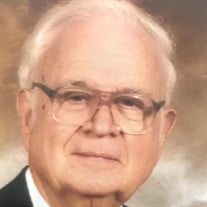 Laurie Coke Lawson, 85, one of the State’s leaders in agriculture, died Saturday, December 2, 2017. Mr. Lawson was born in Darlington, S.C., December 4, 1931, the only child of the late Laurie Marvin Lawson and Betty Hemphill Lawson. He graduated from St. John’s High School in Darlington in 1949 and from Clemson College in 1953 with a degree in agronomy. While at Clemson he played on the golf team. After graduating from Clemson he joined the U.S. Army as a First Lieutenant and was an ammunition officer for the 69th Infantry Division, stationed at Fort Dix, N.J. and then at Aberdeen Proving Grounds in Maryland. After returning to Darlington County to farm in 1955, he devoted his efforts both to the farm and to the community and statewide services. He owned and operated a diversified farming operation in Darlington County that included tobacco, cotton, corn, soybeans, sweet potatoes, wheat and turfgrass. He was a hands-on farmer who enjoyed and was successful in his business. He was a member and past president of the Darlington County Agricultural Society. He was a member and past president of the Darlington County Farm Bureau and was a former member of the Board of Directors of the S.C. Farm Bureau Federation, the S.C. Farm Bureau Mutual Insurance Company, and was a member of the S.C. Farm Bureau’s Legislative Committee, among others. He was named the Darlington Junior Chamber of Commerce’s “Outstanding Young Farmer” in 1962. Mr. Lawson was appointed to the S.C. Agriculture Commission by Governor Riley in 1979 and again in 1983, and served as its Chairman for eight years. Afterwards he served four more years as a member from the Fourth Judicial Circuit. He was named one of the ten Outstanding Farmers in the U.S. by the American Cyanamid Corporation in 1982 and was named Progressive Farmer’s Man of the Year in service to Agriculture in 1985. He was founder and a member of the S.C. Tobacco Association. Mr. Lawson was the recipient of the S.C. Farm Bureau’s Distinguished Service Award in 1986 and was awarded the Order of the Palmetto by Governor Riley in 1987. He received an Honorary Doctor of Laws Degree from Clemson University in 1997 and the Clemson University Alumni Association’s Distinguished Service Award in 1998. He was given an Honorary State FFA Degree in 1998 and an Honorary American FFA degree from the National FFA Organization in 2000. Mr. Lawson received the Algernon Sydney Sullivan Award from Clemson University and served for a time as the Assistant to the Vice President of Public Service and Agriculture for Clemson. In the spring of 2017, the lobby of the Clemson Extension Service in Florence was named in his honor. Mr. Lawson was appointed State Executive Director of the S.C. Farm Service Agency of the USDA on the recommendation of the Senator Ernest F. Hollings in May of 1993 and served from 1993-2001 and again from 2009-2011 when he retired at age 80. His desire was always how he could best help the farmer who needed assistance and see government work for them. Mr. Lawson was a member and past President of the Darlington Kiwanis Club. He was the Darlington Chamber of Commerce’s Professional of the Year in 1976. He served as a Director and Chairman of the Board of Directors of the Darlington C & S Bank, now Bank of America. He was a member and past Chairman of the Darlington County Development Board and was a member of past Chairman of the Darlington County Board of Education. Mr. Lawson was a Christian Gentlemen and was a faithful and devoted member of Trinity United Methodist Church in Darlington where he served as Chairman of the Board of Trustees for over 25 years. He was a past Lay Leader of the Church, a member of the Council on Ministries and a former Chairman of the Administrative Board, served for many years as Chairman of the Building and Property Development Committee and as a Sunday School Teacher. As a Methodist he was a past member of and Chairman of the Board of Epworth Children’s Home in Columbia. On July 11, 1953 he married Elizabeth (Betty) Banks Pearce of Darlington, who died August 29, 2006. Surviving are his four children, all of Darlington: Marvin Irving Lawson (Brigette); Elizabeth Coke Lawson; William Edward Lawson (Laura) and James Hemphill Lawson (Lisa); ten grandchildren: T. Fields Norwood (Leah) of Florence; Laurie Gregg McBride (Brad) of Hartsville; Julia Lawson Taylor (Jay) of Greenville; Claire Hemphill Lawson of Charlotte; T. Lawson Gregg of Charlotte; Caroline Coke Lawson, Elizabeth Pearce Lawson and Mary Adair Lawson of Darlington; Kate Hemphill Lawson and James Laurie (Jay) Lawson of Darlington; and one great-grandchild, Lawson Clair Norwood of Florence. He is also survived by his sister in law, Mary Pearce Wells (John) of Seabrook Island, S.C. Funeral services will be held at 3 o’clock on Tuesday, December 5, 2017 at Trinity United Methodist Church, 126 Pearl Street, Darlington, S.C. 29532, and his former Pastor Timothy J. Rogers officiating. The family will receive friends during the hours of 4-7 PM on Monday, December 4, 2017 and following the funeral service at the residence, 104 Tennessee Drive, Darlington, S.C. Memorials may be made to Trinity United Methodist Church Building Fund, PO Box 16, Darlington, S.C. 29540. Kistler-Hardee Funeral Home is in charge of all arrangements.

The family of Laurie C Lawson created this Life Tributes page to make it easy to share your memories.

Laurie Coke Lawson, 85, one of the State’s leaders in agriculture,...

Send flowers to the Lawson family.