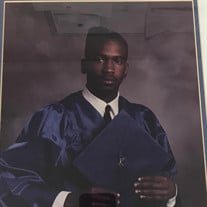 Darlington, South Carolina Milton Mack Stuckey, III On Friday, November 15, 2019 surrounded by his family, Milton Mack Stuckey, III, departed this life in McLeod Hospice Facility in Florence, South Carolina. Milton was born in Darlington, South Carolina on February 17, 1972, to the late Milton Mack Stuckey, Jr. and Mrs. Meta R. Stuckey. Milton attended the public schools of Darlington County and graduated from Darlington High School in 1990. He later received his plumbing license from The State of South Carolina Department of Labor, Licensing and Regulations Contractors Licensing Board of Columbia, South Carolina. At a early age, Milton was baptized in Jesus name by the late Elder Wallace Johnson, and continued attending church periodically until his death. Milton continued working his father’s business, and just like his father he fixed many people’s plumbing even when they didn’t have any money, especially senior citizens. Milton, was also known for calling his mom, kids and friends in the middle of the night wanting to talk, and after he wakes them up then he’ll say I’m sleepy now, so then he’s ready to go to sleep. Milton was preceded in death by his father, Milton Mack Stuckey, Jr.; grandparents, Charlie and Oneita Robinson, and leaves to cherish his memories his wife, Mrs. Dorothy Thompson Stuckey of Florence, South Carolina a loving mother, Mrs. Meta R. Stuckey of the home, three daughters, Latrivia Monique Stuckey of Fayetteville, North Carolina, Lakeytria Brown of Darlington, South Carolina, Tonja Coleman of Charlotte, North Carolina, one granddaughter, Latavia S. Samuel, two sons, Xavier Davis, Kingston Mack Stuckey, and a devoted friend, Ms. Tiwanda Smith and children, all of Darlington, South Carolina, and a host of aunts, uncles, cousins, and other loving relatives and friends. Funeral services will be held on Wednesday, November 20, 2019 at 1 PM at Christ Temple Holiness Church. Burial will be in the Robinson Family Cemetery, services are being directed by Kistler-Hardee Funeral Home of Darlington. A viewing will be held on Tuesday, November 19, 2019 from 5 until 8 PM at Kistler-Hardee Funeral Home of Darlington. Family and friends are invited to sign the online guest book at www.kistlerhardeefuneralhome.com “Obituary lovingly scripted and provided by his family.”

The family of Milton Stuckey III created this Life Tributes page to make it easy to share your memories.

Send flowers to the Stuckey family.