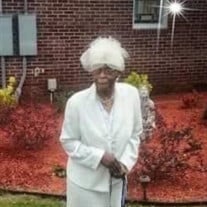 A Tribute to Naomi Green Samuel And the God of all grace, who called you to his eternal glory in Christ, after you have suffered a little while, will himself restore you and make you strong, firm and steadfast. 1 Peter 5:10 On December 22, 1929, Andrew and Rebecca Green were blessed with a beautiful daughter, whom they introduced to the world as Naomi Green. On June 18, 2020, Naomi traded in her earthly home for her Heavenly home, while surrounded by her family. Born and raised in the Round O Community, Naomi attended the schools of Darlington County. Never needing a formal degree, she was donned with an honorary Ph.D in home medicine, culinary arts, matters of the heart, and “things” of the world. What she knew, she didn’t mind sharing with whomever needed a lesson. A proud, lifelong member of “The O,” Naomi spent her life working in and around Round O Missionary Baptist Church. She served on the usher board, choir, and wherever else she saw that she was needed.Naomi was not meant to live in this world without a help mate, so God sent James “Bob” Samuel to take care of her heart. United in matrimony for 61 years, together they created their “perfect 10” children. It is certain that Bob was waiting at the Pearly Gates, arms stretched out wide, for his girl, “Monkey!”Known for her homemade spicy b-b-q sauce, her quick-witted tongue, her unending love for her grands, and the many meals and love shown to the kids in and around the neighborhood, Naomi (a.k.a. Naomio) will forever be the QUEEN of 105 Jeffrey Street. Memories of a lifetime were made with Naomi’s children: sons, James, Nathaniel, Willie, Leroy, Charles, Sidney, Allen, and Sheldon; daughters, Andrena, Evelyn, Jeanette, Joyce, Robyn, and Tracey; siblings, Robert, Pearlie, Fannie, Carrie, Lizzie, and Theola; 25 grandchildren, a few of whom were reared in the home, Jayms-Nehomé, James “Bleek”, and Avery; a host of great-grandchildren, three of whom were reared in the home, JA-C, Khylan and Kash; great-great-grandchildren; a son-in-law, five daughters-in-law; and a host of other family and friends. Naomi was cared for by her loving family and friends who were like family. She had her own unique way of making everyone think they were the favorite, but everyone knew she doted a little extra on the few (wink). Although she was never without family care, a special thanks must be given to Tracey and Charlie Boy, for their sunrise to sunset attention to mom. Life was made more precious by the special neighborhood family friendships with Elder Johnny and Almena Moses, Clarece Pauley, Patricia Sawyer, and everyone up and down Jeffrey Street.

A Tribute to Naomi Green Samuel And the God of all grace, who called you to his eternal glory in Christ, after you have suffered a little while, will himself restore you and make you strong, firm and steadfast. 1 Peter 5:10 On December 22,... View Obituary & Service Information

The family of Naomi Samuel created this Life Tributes page to make it easy to share your memories.

A Tribute to Naomi Green Samuel
And the God of all grace, who...

Send flowers to the Samuel family.