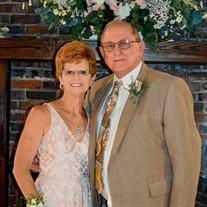 Robert Preston “Bob” Nolan, 71, of Society Hill died Sunday, August 29, 2021. Funeral services will be held Thursday, September 2, 2021 at 1 PM at Palmetto Street Church of God in Florence. Burial will follow on the family farm in Society Hill. Mr. Nolan was born in Darlington County. He was the son of the late Preston and Winnie Mae Hardee Nolan. He was raised in Society Hill and graduated from Cheraw High School. Following high school, he went to work in the logging business for many years, and retired as owner of Nolan Logging Company. Mr. Nolan was a member of Palmetto Street Church of God in Florence where his son, Neal, serves as Pastor. He was very proud of Neal and was supportive of his ministry in every way. He loved the logging business. Over the years he had developed a quality reputation in that industry and passed the love for the log woods on to his sons, Brandon and Robbie, who carry on the tradition to this day. After he retired, he had more time to watch racing and was an avid fan of NASCAR, always pulling for the Fords. He also spent a lot of time in church where he loved the music and he loved to sing. He was a people person, he never met a stranger and they say that those who met him, never forgot him! He loved watching the old western movies like Gunsmoke, and High Chaparral. But in the last semester of his life he had grown to love the smaller things like petting his cat, spending time with his family, and enjoying his home place. The love of his life was his wife, Billie Walters Nolan. They enjoyed every day as if it were their last. He loved his boys and their wives; Robbie Nolan and wife Tracy of Society Hill, Pastor Neal Nolan and wife Jessica, and Brandon Nolan and wife Cindy. He loved his sisters, Edna Chapman, and Betty Peacock and husband, Douglas and his brothers, Edgar Francis Smith and Frank Kelly. His grandchildren were the apple of his eye: Austin Nolan (SaVannah), Bailey Dority, Gage Ayer, Aiden Nolan, and Ashton Nolan, and his great grandchildren, Cash and Memphis Nolan. Among those who greeted him in heaven were his daughter, Ann Cherie Nolan and his sister, Annette Nolan. The family will receive friends Wednesday, September 1, 2021 from 6 PM until 8 PM at Kistler-Hardee Funeral Home and at all other times at the family home. Memorials may be made to Palmetto Street Church of God, In Memory of Bob Nolan, 3132 West Palmetto Street, Florence, SC 29501.

The family of Robert Preston "Bob" Nolan created this Life Tributes page to make it easy to share your memories.

Send flowers to the Nolan family.