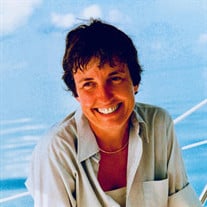 Rolfe Fort Godshalk, 80, died at her home on Sept. 11, 2020, with family at her side. She was diagnosed In July with a metastatic recurrence of lung cancer, two months after receiving a chainsaw for Mother’s Day and 15 years after a lung lobectomy thwarted an initial bout with the disease. Born in El Paso, TX on September 14, 1939, Rolfe was the daughter of June Saunders Files and Thomas Russell Files. She is survived by her husband of 62 years, Dave Godshalk, and children Merrell Foote (John) of Austin, TX; David Godshalk of Shippensburg, PA; June Newton (Andrew) of Seneca, SC; and Rolfe Olsen (Jim) of Columbia, SC. She is also survived by grandchildren Al and Cecily Foote, both of Austin, TX; James Newton of Portland, OR; Thomas Newton of Atlanta, GA; Georgia Olsen of Greenville, NC; James and David Olsen of Columbia, SC; sister Carolyn Files of Oak Ridge, LA; and many special nieces and nephews. She was preceded in death by her sister, Merrell Gregory. Lover of reptiles, rehabber of injured songbirds, and rescuer of homeless dogs, Rolfe lived a nomadic life filled with adventures. During post-World War II reconstruction, she resided at U.S. Army bases in Germany, Greece, and Oklahoma, where her beloved stepfather, Colonel Al Fort, was stationed. When the family returned to El Paso, Rolfe served as captain of her high school tennis team, then enrolled at Texas Tech, where she pledged Pi Beta Phi. As a camp counselor in New Mexico, Rolfe met the love of her life, Dave, a soon-to-be-commissioned Army officer. Married after a whirlwind courtship, the young couple spent the next few years in Baltimore, MD and Fort Polk, LA. Following military life, Dave was hired by Sonoco Products Company, which took the couple first to Kent, OH, where, pregnant with her first child, Rolfe continued her higher education at Kent State University. While living in the California communities of Hacienda Heights and Hayward, the family grew to six, with Rolfe planning outings to Disneyland, Catalina Island, and Knott’s Berry Farm. At their next stop, Newport, TN, Rolfe edited the book “Newport” as a member of the town’s Clifton Club and began her career as a craftswoman, transforming river rocks into whimsical painted critters. She then became a self-taught metal enamelist, adept at adding the tiniest of details to one-of-a-kind pieces of jewelry and colorful butterflies and dragons set on driftwood. Her work was exhibited at arts and crafts shows and galleries throughout the Southeast. After moving to Hartsville, SC, Rolfe directed the city’s Arts Alive festival for 10 years, coordinating elaborate fundraising balls that supported the event. Combining her creative and organizational talents, she established Rolfe’s Gallery, a series of fine arts and crafts shows in North and South Carolina, one of which hosted a popular annual alligator cook-off featuring the finest chefs of Hilton Head Island. She chaired Homes for Hartsville, a nonprofit organization that built houses in the 1990s for families in need. A master gardener, Rolfe served on the board of Kalmia Gardens and was a sustaining member of Hartsville’s Spring Beauty Garden Club. As a horticulture assistant with Darlington County’s Clemson University Cooperative Extension in the early 2000s, Rolfe helped develop and lead local Master Gardener Program activities. More recently, she was a volunteer at Re-Tail Therapy Resale, the Darlington County Humane Society’s thrift shop, and a mentor at North Hartsville Elementary School. Rolfe served as contractor for her pondside home, landscaping the forested property with a unique variety of ornamental plants, trees, and edibles. In this magical wonderland, her grandchildren paddled canoes, roasted hot dogs, filmed movies, ate fresh-picked blueberries and asparagus, and counted toads on evening expeditions through the yard. Her life-sized pair of knights in shining armor welcomed family to lively celebrations, where Rolfe’s secret recipe for Caesar salad was in high demand and card games of Hearts were rowdy fun. Rolfe traveled to destinations both ordinary and unusual, near and far, such as Pearl Fryar’s Topiary Gardens in Bishopville, Riverbanks Zoo, the South Carolina Coast, Orlando theme parks, secluded Caribbean islands, the Arabian Peninsula, and romantic locales across Europe. The Rev. Ashley Cheek of First Presbyterian Church of Hartsville will officiate a private interment of ashes at St. Bartholomew’s Episcopal Church Memory Garden, a labor of love that Rolfe envisioned and brought to fruition. A memorial service will be held at First Presbyterian Church of Hartsville at a later date. In lieu of flowers and to honor Rolfe’s lifelong mission of helping those in need, donations may be made to the Darlington County Humane Society, and random acts of kindness given to anyone struggling to overcome adversity.

Rolfe Fort Godshalk, 80, died at her home on Sept. 11, 2020, with family at her side. She was diagnosed In July with a metastatic recurrence of lung cancer, two months after receiving a chainsaw for Mother&#8217;s Day and 15 years after a lung... View Obituary & Service Information

The family of Rolfe Fort Godshalk created this Life Tributes page to make it easy to share your memories.

Send flowers to the Godshalk family.