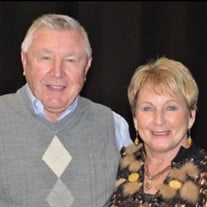 Ronald G. “Ron” Speder, 81, husband of Patty Huntley Speder, died Friday, January 22, 2020. A Memorial Service will be held Tuesday, January 26, 2020 at 11 AM at Kistler-Hardee Funeral Home in Darlington. Mr. Speder was born in Lithuania. He immigrated to America in 1956 at the age of sixteen. A few short years later he joined the United States Army where he quickly advanced to the officer rank of First Lieutenant. His military duties ended in 1970 when he was Honorably Discharged. In 1989 he met Patty Huntley and soon after, they were married. He worked for ESAB where he retired in 1999. He attended Swift Creek Baptist Church for many years, along with Patty and some of his children and grandchildren. Being a United States citizen was an honor to Ron. His love for his country and his pride in America could only be matched by his love for his family. The two went hand and hand. The good Lord puts people in the right place, at the right time, with the right people, for the rights reasons. Ron was no exception. His kindness, his wonderful smile, his non-judgmental attitude, his genuine compassion for others, landed him in a place that could only have been from the stroke of the Master’s hand. His life was a gift, and one that was greatly appreciated by his family and also his friends. He will truly be missed and his memory will live in the hearts of us all forever. His family includes his wife, Patty; his children, Timmy Huntley and wife Nancy, Ricky Huntley, who went to be with the Lord a few years ago, Jeff Speder and wife Jelene, Tanjah Hall and husband Trey, and Scott Speder; his brother, Sieg Speder and wife Bonnie; his grandchildren, Lyles Brannon and husband Josh, Roddy Huntley and wife Krissy, Chett Huntley and wife Kassie, Thorn Huntley, Chase Hall, Tanner Hall, and Morgan and Matthew Speder; his great grandchildren, Briar Huntley, Tripp Huntley, and Huntley Brannon

The family of Ronald G. Speder created this Life Tributes page to make it easy to share your memories.

Send flowers to the Speder family.