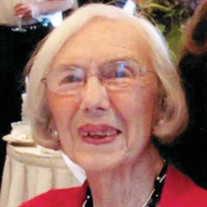 Ruth Browning Breeden, 98, passed away April 25, 2021, after a long, healthy, and rewarding life. Ruth was born, September 30, 1922, in Hendersonville, N. C.; a daughter of the late Rev. Raymond and Molly Browning. In addition to her parents, she was predeceased by her husband, Billy K Breeden, daughter Billie Kay Breeden, Brother Rev. David Browning (Elizabeth) and Sisters Jean Shirley (Millard) and Nina Ray Moore (Jack). She is survived by her son Kennedy Breeden (Susan) of Florence and daughter, Jean Taylor (Gary) of Greenville; grandchildren: Douglas Lynn (Valerie) & Jeff Lynn (Haley) of Dillon, Lee Taylor & Wade Taylor of Greenville, Will Breeden of Indianapolis, IN, Mary Susan Barfield (Ron) of Latta and Harrison Breeden of Florence; great grandchildren: Jack Lynn, William Lynn, Lucas Lynn, Mercer Taylor, Benjamin Taylor, Ella Barfield, Win Barfield, Ariel Breeden, Grace Breeden, Blair Breeden and Will Breeden; sisters: Elizabeth Oakes of Spokane, WA and Joan Carroll of Seattle, WA, and numerous loved nieces and nephews from throughout the U. S. The Browning family lived in North Carolina and in the Midwest for several years and moved to Bennettsville, S. C. Ruth met her husband (of almost 60 years), Billy K. Breeden, in Bennettsville. While Billy K. was serving in the WWII Pacific Region, Ruth lived in Pasadena, CA, and attended Pasadena College. Ruth and Billy K., moved from Bennettsville, S. C., in 1953, to Dillon, S. C., and Ruth resided in Dillon until 2004, when she moved to Florence, S. C. She was active in numerous organizations, businesses and activities while living in Dillon. She was a loyal and active member of Main Street Methodist Church in Dillon. For many years, she tirelessly served as a children's Sunday School teacher and meal preparer at Main Street Methodist Church (she was an incredible gourmet cook at home and at the church). In Dillon, Ruth was active in several Garden Clubs (she was an ardent gardener and had considerable pride in the beauty of her yard and flowers) and was also a faithful member of the Wednesday Night Bridge Club. She was a bookkeeper at Breeden Chevrolet in Dillon and served as the Librarian, for many years, at East Elementary School in Dillon. Ruth and her husband were also the owners of Breeden's Old Stuff Antiques in Dillon. Their antique business enjoyed many years of robust activity, until its closing in 2000. Many families, throughout southeastern S. C. and N. C. still have furniture and other items from Ruth's antique business. She enjoyed a unique reputation for not only selling high quality furniture, and other related items, but also for knowing the actual history, or stories, behind the items she sold to her customers. Throughout her years in Dillon, Ruth was loved and always followed by her two faithful companions—Fanny (lab) and Snugglebug (Boston Terrier). In 2004, Ruth moved to Florence, S. C. and then became a resident at the Manor in Florence in 2010. She was also a member of Central United Methodist Church in Florence, and she attended and enjoyed many church and civic musical performances at Central. She was an avid reader and became a weekly regular at the Florence County Library. Ruth was always athletic in nature and was an avid water skier. In her prime, she could slalom with the best of any amateur water skiers. While on one of the Chevrolet dealer reward trips to Jamaica, she was regularly invited to water ski with the resort water ski excursion staff. She loved teaching children, and adults, how to water ski. Kistler-Hardee Funeral Home is handling the funeral arrangements. The dates for a memorial service at the Ingram Chapel at the Manor and for a private, family graveside service at Greenlawn Cemetery, in Dillon, S. C., will soon be announced in The Morning News Obituary section. The family would like to express their deepest gratitude to Dr. Steven Ross; the incredible staff at the Manor; and to the wonderful McLeod Hospice staff for the exceptional and loving care they provided to Ruth. In lieu of flowers, please send memorials for Ruth to any of the following: Central United Methodist Church, 265 W. Cheves St., Florence, SC 29501; The Manor, 2100 Twin Church Road, Florence, SC 29501; McLeod Hospice, 1203 E Cheves Street, Florence, SC 29506; or Main Street United Methodist Church, 401 E. Main St., Dillon, S. C. 29536.

Ruth Browning Breeden, 98, passed away April 25, 2021, after a long, healthy, and rewarding life. Ruth was born, September 30, 1922, in Hendersonville, N. C.; a daughter of the late Rev. Raymond and Molly Browning. In addition to her parents,... View Obituary & Service Information

The family of Ruth Browning Breeden created this Life Tributes page to make it easy to share your memories.

Send flowers to the Breeden family.