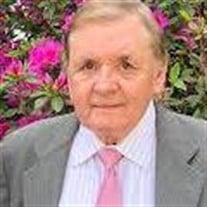 The Honorable Daniel B. Causey III

Mr. Daniel Beaufort Causey, III, esq., of Darlington and formerly of Conway, died Saturday, January 4, 2020. Mr. Causey graduated from college at the Citadel in 1964 – a place which he credited for instilling his lifelong sense of duty, diligence, and dedication. While at the Citadel, Mr. Causey was a member of the sailing team, even sailing with the yacht of the Queen of England during a regatta in the Bahamas. Following his time at the Citadel, Mr. Causey served as a lieutenant with the United States Army, 31st Infantry Regiment. Mr. Causey was stationed in South Korea, and led patrol missions along the border of the Demilitarized Zone following the Korean War. Mr. Causey told stories of sharing meals with people his patrol encountered on both sides of the border. While in the Army, Mr. Causey was also a member of a paratrooper regiment, which he joined to help him overcome his fear of heights. Although Mr. Causey’s jumps were successful, his attempt to get over his fear was not. After the Army, Mr. Causey went to law school at the University of South Carolina, graduating in 1971. He then moved to Darlington, South Carolina to work under State Senator James Pierce “Spot” Mozingo, III, before eventually opening up his own practice. Mr. Causey took pride in working to assist his clients in seeking justice regardless of their racial or socioeconomic background. Mr. Causey was often rewarded for his legal services with gifts ranging from sweet potatoes to Christmas trees. Mr. Causey was appointed Municipal Court Judge for the city of Darlington in 1987 – a position he held for 30 years before retiring in 2017. Mr. Causey enjoyed the opportunity this position afforded to positively impact people’s lives. His style from the bench was to deliver tough love so those that went before him would learn a lesson and not have to appear before him again. Despite his stern demeanor, he was a fundamentally gentle and kind man. He believed in the promise of the human spirit to flourish if given the right opportunity, and worked to find creative solutions in court to allow that opportunity to happen. Mr. Causey’s commitment to individual growth extended outside his professional life. Mr. Causey served on the Board of Directors for the Billie Hardee Home for Boys, a place for boys that had been abused, abandoned or had become delinquent to find stability and get back on the right path. Mr. Causey led the St. Matthew’s Church Youth Group, and also served as a Vestry Member and Senior Warden of the church. Perhaps the greatest example of Mr. Causey’s commitment to the development of others was shown in his love towards his family. Mr. Causey was a devoted husband and father for whom no sacrifice was too great to ensure his family had what they needed to reach success and continually find joy in the wonder of life. He is the son of Daniel B. Causey, Jr., and Esther L. Causey. He is survived by Daniel B. Causey, IV, and Nancy P. Causey. Funeral services will be held on Wednesday, January 8, 2020 at 2 PM at St. Matthews Church in Darlington. The family will receive friends following the service at the church. Donations in honor of Mr. Causey may be made to the St. Matthew’s Church Choral Fellowship by mail to P.O. Box 804, Darlington, SC 29540; or to the American Lung Association online at http://action.lung.org/goto/DanCausey. Arrangements have been entrusted to Kistler Hardee Funeral Home of Darlington.

Mr. Daniel Beaufort Causey, III, esq., of Darlington and formerly of Conway, died Saturday, January 4, 2020. Mr. Causey graduated from college at the Citadel in 1964 &#8211; a place which he credited for instilling his lifelong sense of duty,... View Obituary & Service Information

The family of The Honorable Daniel B. Causey III created this Life Tributes page to make it easy to share your memories.

Send flowers to the Causey family.