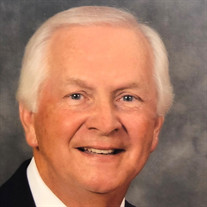 On Thursday March 7th, 2019 at 2 am, the righteous soul of our friend was transported from Earth to the God who gave it. He was born November 27th 1946. His second birth was February 2nd 1967. He died as he lived, triumphant in the gospel faith. He was married to Miss Lorie Loretta Lewis 52 years ago, who survives him together with their two boys, Thomas Edward Dowling (Lindsey), Teddy Andrew Dowling (Tia), 4 grandchildren & 4 great grandchildren. Mr. Dowling's testimony as to his willingness to go to his eternal Heavenly home was clear, without a single fear or doubt, so joyous was he that it was a surprise to many who only met him in the recent days. Mr. Dowling was not as great a success in a financial way as some men are, but left to his boys a heritage that is far more valuable than any worldly treasure, a consistent Christian character and servant. Mr. Dowling was a retired business consultant, a loving husband, a wise father, a kind neighbor, a hobby farmer, beloved and esteemed by all who were blessed to know him. Never too busy to discuss life issues with someone in need, he would always point them to the Bible, to the principles from God's Word and life's lessons he learned. Although he was confined to suffering and affliction for his final several weeks, he was never heard to fret or complain, but steadfastly looked forward to the moment when he could depart and be forever present with his Lord. He, together with his family, planned his funeral arrangements. He stated his wish for the importance of the ceremony to be effective and efficient. He outlined the service, conversated with the speakers and selected the music. His funeral service will be held Saturday March 9th, 10 am at Ebenezer Baptist Church 524 S Ebenezer Rd.In lieu of flowers, donations can be made to: Lake Swamp Baptist Church Building Fund, 6558 Oates Hwy., Timmonsville, S.C. 29161.

On Thursday March 7th, 2019 at 2 am, the righteous soul of our friend was transported from Earth to the God who gave it. He was born November 27th 1946. His second birth was February 2nd 1967. He died as he lived, triumphant in the gospel faith.... View Obituary & Service Information

The family of Thomas Dowling created this Life Tributes page to make it easy to share your memories.

Send flowers to the Dowling family.